Neijing tu (Chart of the Inner Warp).
See a larger reproduction below.

● A Japanese chart of the body

The most famous Neidan picture of the human body is the Chart of the Inner Warp (Neijing tu). Its main version is drawn on a stele, dating from 1886, now found on the walls of a building in the Abbey of the White Cloud (Baiyun Guan) in Beijing, next to the Xiuzhen tu (Chart for the Cultivation of Reality). Like other Neidan pictures of the body, the Chart of the Inner Warp should be "read" from the bottom upwards. The three main parts of picture, which shows a side view of the body, focus on the lower, central, and upper Cinnabar Fields, following the course of the Neidan practice. 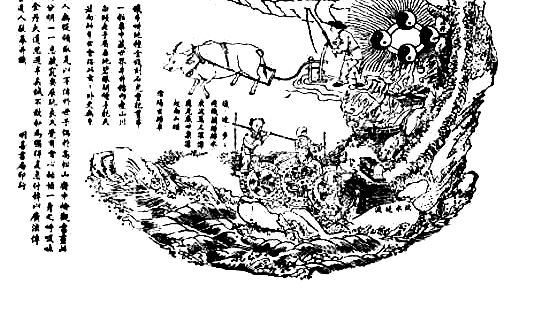 In the lower part, a boy and a girl who represent Yin and Yang are working on a treadmill placed in the Caudal Funnel (weilü), at the bottom of the spine. Inverting the stream of energy (actually the jing or Essence, depicted by the water course along the spine), they avoid that it flows downwards and is wasted. (With the Spinal Handle and the Jade Pillow mentioned below, the Caudal Funnel is one of the Three Barriers or sanguan.) Water thus turns into a fiery furnace, which heats the lower Cinnabar Field placed near the four Yin-Yang symbols; these stand for the four external agents (Wood, Fire, Metal, Water), with the fifth one (the central Soil) represented by their conjunction. On the left of the Cinnabar Field is the "iron buffalo ploughing the earth and planting the golden coin," an image of the first seed of the Golden Elixir. 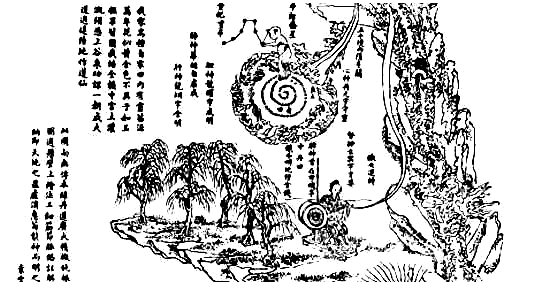 At the center is the middle Cinnabar Field, shaped as a spiral and located in the region of the heart. Just above it is the Herd Boy, who holds the constellation of the Northern Dipper, a symbol of the center of the cosmos. According to a famous Chinese story, the Herd Boy (corresponding to the constellation Altair) only once a year can meet and conjoin with the Weaving Girl (corresponding to Vega), who is pictured below him. At the level of the Weaving Girl, along the spine, is the Spinal Handle. 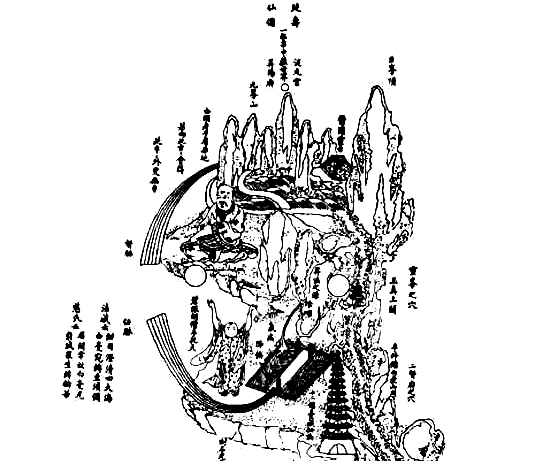 The upper part of the picture represents the upper Cinnabar Field. Above and behind the Twelve-storied Pavilion (the trachea), is the Jade Pillow. Behind the mountains, on the left, the Control vessel (dumai, which runs on the back of the body) emerges; the old man sitting next to it is Laozi. Below the Control vessel, the Function vessel (renmai, which runs on the front of the body) begins; the monk standing with raised arms next to it is Bodhidharma (who, according to tradition, brought Chan Buddhism to China). The two dots stand for the eyes, and represent the Sun and Moon.