Xiuzhen tu (Chart for the Cultivation of Reality)

Xiuzhen tu
(Chart for the Cultivation of Reality).
See a larger reproduction below.

The Chart for the Cultivation of Reality (Xiuzhen tu) has been transmitted in different exemplars from the early 1800s onwards. The one reproduced here is found at the Abbey of the White Cloud (Baiyun Guan) in Beijing, on a stele next to the Neijing tu (Chart of the Inner Warp). This chart, more complex compared to the Neijing tu, underscores cosmological elements.

The human figure, shown in a front view, is surrounded by thirty black and white circles that represent the lunar cycle during the month, and by the animal spirits of six internal organs: dragon (liver), turtle and snake (gallbladder), two-headed deer (kidneys), red sparrow (heart), white tiger (lungs), and phoenix (spleen). The trigrams arranged around the figure (Zhen ☳, Dui ☱, Qian ☰, Xun ☴, Gen ☶, and Kun ☷, the last of which is not shown in this exemplar) represent the six stages of the lunar cycle, which correspond to the six internal organs just mentioned.

In the middle of the picture, four of the leaf-like figures below the trachea represent the heart, the lungs, the liver, and the gallbladder. Each of them bears the names of seven of the twenty-eight lunar mansions. The heart (the central petal) also bears the seven stars of the Northern Dipper. Below the petals are four large semicircles arranged like a cross. The upper one contains an infant sitting above the graph qi (炁, Breath) and the trigram Li ☲ (Fire, Yang holding True Yin). Outside the semicircle, at the level of the infant, are a monkey and a horse, which respectively represent the mind and the Intention (yi, which leads the entire alchemical process). The lower semicircle shows a standing infant, above whose head are the graph jing (精, Essence) and the trigram Kan ☵ (Water, Yin holding True Yang). At the center of the cross formed by the four semicircles is the Qian ☰ trigram, representing the Elixir; this is the position of the middle Cinnabar Field.

● A Japanese chart of the body

At the top, the forehead and the nose bear names of deities and celestial locations, as well as names of other loci of the inner body; these include the Muddy Pellet (niwan, the upper Cinnabar Field) and the Celestial Eye (tianmu, between the eyes). The rings just below—which are twelve in other versions of this chart—represent the Twelve-storied Pavilion, or trachea. An arc representing the spine begins behind the head; the twenty-four circles along this arc bear the names of the twenty-four periods of the year (jieqi, each lasting fifteen days). In the upper, central, and lower parts of the spine are three larger circles, corresponding to the Three Barriers that the Essence must overcome along its upward circuit. The three chariots inside or besides those circles show the "chariots" that allow the Essence to go upstream. Finally, the circle above the head represents the Palace of the Muddy Pellet, i.e., the upper Cinnabar Field. At the center of the circle stands the Realized Man of Original Destiny (Yuanming zhenren), who represents one's embodiment in the state prior to the birth of the cosmos. 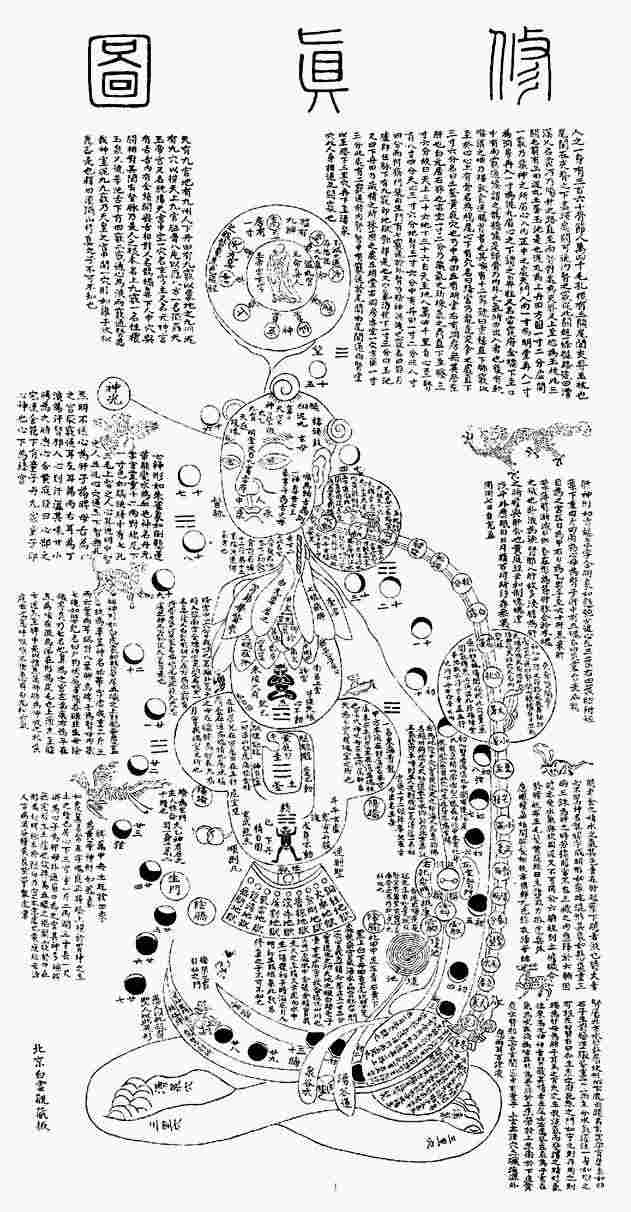