Based on the Introduction of:

The Seal of the Unity of the Three: A Study and Translation of the Cantong qi, the Source of the Way of the Golden Elixir

Under an allusive poetical language and thick layers of images and symbols, the Cantong qi hides the exposition of the teaching that gave origin to Taoist Internal Alchemy (Neidan). In addition to a complete translation, this book contains a detailed introduction to the history and teachings of the Cantong qi, explanations of each of its sections, and notes on its verses.

This page is part of a series on the Seal of the Unity of the Three. See the complete index.

The Taoist tradition deems Wei Boyang to be the author of the Cantong qi (The Seal of the Unity of the Three), the main text of Taoist alchemy. This article contains a translation of his two most important biographies.

(1) Biography in the Shenxian zhuan

The main account of Wei Boyang's life is found in the Shenxian zhuan (Biographies of the Divine Immortals), a work traditionally attributed to Ge Hong (283-343). The first full record of the Shenxian zhuan biography, which is also deemed to be the most reliable one, is found in the Taiping guangji (Extended Collection of Records of the Taiping xingguo Reign Period), dating from 978. This version is translated below. 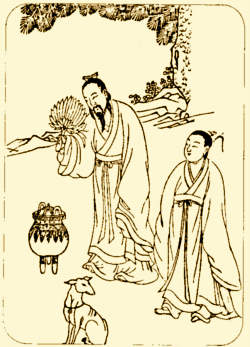 Wei Boyang, his faithful disciple,
and his dog

Wei Boyang was a native of Wu (present-day Jiangsu, and parts of Anhui and Zhejiang). He was the son of a high-ranking family, but by nature was devoted to the arts of the Dao. Later he retired on a mountain with three disciples in order to compound the divine Elixir. Knowing that his disciples were not thoroughly committed in their hearts, when the Elixir was ready he said in order to test them: "The Elixir is ready, but it ought first to be tested on our dog. If the dog rises to Heaven, we may take it ourselves. If the dog dies, we should not take it." He gave the Elixir to the dog, and the dog immediately fell dead.

Boyang told his disciples: "I am afraid that the Medicine was not ready. It has caused death upon ingestion, so it seems not to be in harmony with the Numinous Light (shenming). If we ingest the Medicine, I fear we will share the fate of our dog. What shall we do?" The disciples asked: "Master, would you take it yourself?" Boyang replied: "I have turned my shoulders to the worldly ways and have forsaken my home in order to retire on this mountain. I would be ashamed to return without having found the Dao. Whether I die or not, I must take it." Thereupon he ingested the Elixir. No sooner was it in his mouth, he died instantly.

On seeing this, one of the disciples said: "The purpose of making the Elixir is to live a long life. If we ingest it and die, what sense does it make?" Another disciple said: "Our Master was not an ordinary person. If he ingested it and died, he must have done it with a purpose." So he took the Elixir, ingested it, and died. The other two disciples said to one another: "We have made the Elixir in order to attain a long life. If we ingest it and die, what is the purpose? By not taking this Medicine, we can still spend a few more decades in this world." So they left the mountain without ingesting the Elixir, with the intention of arranging a funeral for Boyang and their dead fellow disciple.

Translations from the The Seal of the Unity of the Three

● The Principles of Alchemy

● The Lovely Maid of the River

● Materials on The Seal of the Unity of the Three

After the two disciples left, Boyang came to life again. He took the Elixir that he had compounded and poured some of it into the mouths of the dead disciple and the white dog. Both of them also came to life again. Boyang and his disciple, whose surname was Yu, went further into the mountains as immortals. On the way they met a wood-cutter, and handed him a letter of thanks for the other two disciples. When they read it, they were filled with regret.

Boyang wrote the Cantong qi and the Wuxing xianglei (The Categories of the Five Agents), altogether in three chapters (juan). His work talks about the Book of Changes, but in fact utilizes its lines and images to discuss the principles of compounding the Elixir. Knowing nothing about the divine Elixir, the worldly scholars have written several commentaries on it based on Yin and Yang. They have truly missed its meaning.

Although Peng Xiao (?-955) cites the Shenxian zhuan as his authority, he gives a remarkably different account of Wei Boyang in his commentary to the Cantong qi. The fictional nature of this account has been noted for a long time, but several of its elements are significant: the indication of Shangyu as the area of origin of both Wei Boyang and Chunyu Shutong; Wei Boyang's expertise in the esoteric "weft texts"; the close relation between the Cantong qi and the Longhu jing; the subdivision of the Cantong qi into three parts (all of which — according to Peng Xiao — were written by Wei Boyang); the hint that the composition process took place in more than one stage; the reputed date of the text, which would fall around the mid-2nd century; and the attribution of an early commentary to Xu Congshi.

According to the Shenxian zhuan, the True Man Wei Boyang was a native of Shangyu in Kuaiji (present-day eastern Jiangsu and western Zhejiang). His family had inherited official appointments for generations, but the Master did not serve in office. He cultivated the truth in secret and silence, and nourished his mind in Empty Non-being. He was widely versed in both prose and poetry, and was competent in the "weft" and the prognostication texts (weihou). Calm and tranquil, he guarded simplicity and followed nothing but the Dao. He always looked upon ceremonial garments as things of no value.

We do not know the name of the master who transmitted it to him, but he received the Guwen longhu jing (Ancient Text of the Scripture of the Dragon and Tiger). Having fully grasped its subtle meaning, he wrote the Cantong qi in three parts (pian) in agreement with the Book of Changes. It is said, moreover, that since he had not thoroughly treated the fine points, he also wrote the portion entitled "Filling Lacunae" ("Busai yituo"), which elaborates on the mysteries of the scriptures on the Elixir. His accounts repeatedly use metaphors and analogies, hiding the apparent under unusual words.

Wei Boyang secretly disclosed his book to Xu Congshi, a native of Qingzhou, who wrote a commentary on it keeping his name hidden. At the time of Emperor Huan of the Later Han (r. 146-167), the Master again transmitted it to Chunyu Shutong. Since then, it has circulated in the world.