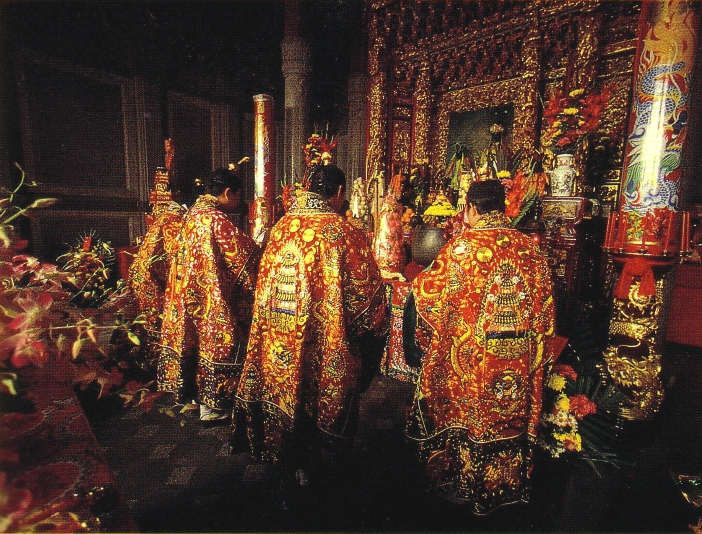 The cosmos generated by the Dao ("Heaven and Earth") and the heavens inhabited by deities that personify the Dao take an intermediate position between the absolute principle and the human world. These two domains overlap to a significant extent, for deities and features of the cosmos often correspond to one another. Both of them play an essential role in the various ways that Taoism provides for "returning to the Dao" (fandao), which are addressed either to the single individual or to the community as a whole.

The features and workings of the cosmic domain are explicated in Taoism largely by means of the language and images of the standard Chinese cosmological system. This system, often referred to as "correlative cosmology," is based on several patterns of emblems (xiang) such as Yin and Yang, the five agents (wuxing), and the ☞ eight trigrams and sixty-four hexagrams of the Book of Changes (Yijing). These emblems function as categories to which the single entities or phenomena can be assigned. The five agents, for instance, emblematize the modes or states in which the one Original Breath (yuanqi) issued from the Dao appears in the cosmos, represented by Wood, Fire, Soil, Metal, and Water.

Directions of space, segments of time cycles, numbers, colors, planets, organs of the ☞ human body, musical notes, and so forth can be assigned to one of these emblematic categories in order to define not only the relations that occur among the elements of a series, but also those that occur among the different domains. Wood, for instance, is associated with the east, spring, the numbers 3 and 8, the color green (or blue), Jupiter, the liver, and the musical note jiao.

The purpose of correlative cosmology, therefore, is not to explain what causes an entity to exist or a phenomenon to occur, but to define its relation to other entities and phenomena. An important corollary to this view is that an event or action happening or performed in one domain may affect the corresponding components in another domain according to the principle of "stimulus and response" (ganying), by which things of the same "category" (lei) influence each other.

Correlative cosmology, which took shape as a comprehensive system between the third and the second centuries BCE, is not tied to any specific intellectual or religious legacy, and is the result of an effort to create a comprehensive analytic and synthetic system with contributions both by thinkers and by specialists of various traditional sciences, including diviners, astronomers, and physicians. Taoism is one of several traditions that have drawn upon this system to formulate their views and to frame their techniques or practices.

In Taoism, correlative cosmology serves not only to explicate the functioning of the cosmos, but also to illustrate the view that all entities and phenomena ultimately originate from the Dao, and that the different forms in the world of multiplicity are contained within the principle of the Unity. At the same time, the emblems of correlative cosmology serve to regulate the process of "returning to the Dao" through the support of a microcosmic framework — the ritual area, the alchemical laboratory, or the human being itself. The ritual area, for instance, is arranged so as to correspond to the cosmos and its temporal and spatial configurations. In alchemy, the stages of the compounding of the elixir reproduce in a reverse sequence the cosmological configurations that intervene between the absolute Dao and the domain of relativity. (See an article on ☞ macrocosm and microcosm.)

Communicating with the Gods 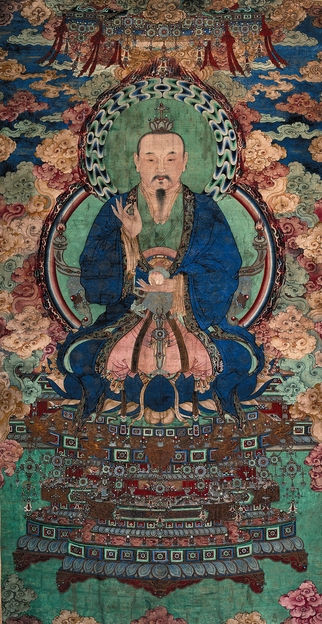 Yuanshi tianzun (Celestial Venerable
of the Original Commencement),
the first of the Three Clarities

The highest Taoist deities are the Three Clarities (sanqing ☞ pictures), each of whom rules over one of the multiple heavens distinguished in Taoist cosmography. They are associated with different pre-cosmic eras and are at the origin of the textual corpora of the Three Caverns — in other words, of the Taoist Canon. The unity of the cosmos is represented in a deified form by the Great One (Taiyi ☞ picture); he resides at the center of the cosmos in the North Pole, in turn symbolically equivalent to the Northern Dipper (beidou), whose apparent rotation around its own axis distributes Original Breath to the regions of space and sustains the cycles of time. Several other gods, such as the "emperors" of the five directions, also represent cosmological principles. In addition, a multitude of deities, most of whom are the expression of local cults, contribute to form a pantheon with indefinite boundaries that takes different forms according to place and time.

The highest gods, or their representatives, reveal texts, teachings, and practices. The scriptures belonging to the ☞ Shangqing and ☞ Lingbao corpora are deemed to have taken shape from graphs coagulated from Original Breath, or from sounds generated by its vibration, in the early stages of the formation of the cosmos. Those graphs constitute the prototypes of the revealed scriptures, which at first are transmitted from one god to another, then undergo various stages of materialization until they are delivered to humans by a divine being.

Just like the gods grant revelations mostly in the form of scriptures, and consistently with the bureaucratic metaphor mentioned above, the typically Taoist form of communicating with the gods is by writing. In ☞ Taoist ritual, the priest delivers a "memorial" (or "statement," shu) to the deities to announce that a ceremony will be performed in their honor, declare the purpose of the ceremony, specify its program, and list the names of those who are sponsoring it. The so-called talismans (fu, a word almost exactly corresponding to Greek symbolon) are traced on paper or other supports, including air, in graphs almost incomprehensible to humans but intelligible to the gods. Like the revealed scriptures — some of which, in fact, are deemed to have evolved from them — the talismans have a counterpart in Heaven, and thus serve to identify and authenticate their possessor. Talismans confer power to summon certain deities and to control demons, but they also protect space and heal illnesses; they are worn on one's body, affixed at the four directions, placed along the path that leads to one's dwelling, or made into ashes and drunk with water.

Another important ritual object that has a written form is the "register" (lu), a formal document of investiture that the Taoist priest receives at various stages of his ordination and that defines his rank, the rites that he may perform, and the deities and spirits over which he has control.

◀ Back: 3. Revelations and Textual Corpora

The Book of the Nine Elixirs

Translation of an early Chinese alchemical text, with comment and notes.

Contains about 300 annotated entries on works in Western languages published through 2009.

Based on the modern edition of the Taoist Canon, published in 2003, with references to the 1445 edition.