Macrocosm and Microcosm in Taoism 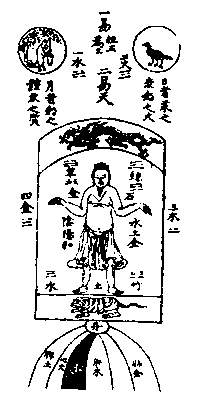 Like several other cultures, China has developed the macrocosm-microcosm theory in different forms. Taoism has borrowed some of them and has elaborated others. These multiple formulations are not restricted to the universe and the human being. Other components come into play. The first is the state: the human community with its codes, hierarchies, and physical seats of power ideally mirrors the configuration and order of Heaven. Reciprocally, Heaven is an administrative system managed through bureaucratic procedures similar to those performed at court and in government offices. The second is the ritual area, whose altars correspond to the cosmos and its temporal and spatial configurations. Other environments and surroundings, including gardens and gourds, are also said to represent a "cosmos in miniature." Cosmos, human being, society, and ritual area are analogically related to each other, so that an event or an action that occurs within any of these domains can be relevant for the others. This is determined by the principle of "resonance" (ganying, lit. "impulse and response"), by which things belonging to the same class or category (lei) influence each other. Ritual, for instance, reestablishes the original bond between humans and gods, and the Realized Persons (zhenren) or the Saints (shengren) benefit the whole human community in which they live by aligning themselves with the forces that rule the cosmos. On the other hand, a ruler who ignores Heaven's omens brings about natural calamities and social disturbances.

In many cases, the conduits linking each domain to the others are either the abstract emblems of correlative cosmology or the gods of the outer and the inner pantheons. Emblems and gods are closely related to each other, as several divinities correspond to cosmological notions. Symbolic numbers and images (xiang) play a central role in establishing these relationships. In Taoism, however, numbers and images also perform an even more important function, as they serve to express both the different stages of the self-manifestation of Dao into the macrocosm, and the reverse process of return to the Dao, which is often performed with the support of a microcosmic framework.

See an article on the Taoist views of the human body

The macrocosm-microcosm theory lies at the core of correlative cosmology. The pattern of the five agents (wuxing), in particular, forges relations among various sets of entities and phenomena, such as numbers, colors, spatial directions, seasons, planets, musical notes, and so forth. Within these sets, the relation of the five viscera (wuzang) to the seasons and directions aligns the human microcosm to the macrocosmic categories of space and time. An example of the adaptation of this theory in Taoism is the practice of absorbing the "breaths" (or energies, qi) of the five directions. In other instances, the macrocosm-microcosm theory establishes looser analogies between cosmic phenomena and functions or organs of the human body. Here too, the identification with the cosmos is not only spatial but also temporal. Several Han-dynasty texts, for example, indicate correspondences between the 360, 365, or 366 days of the year and the identical numbers of joints in the body.

The greatness of Heaven and Earth, and the depth of creation and transformation, lies in the fact that the five agents part and distribute themselves, and that the eight trigrams arrange themselves in a ring. By which art can you steal them and seize them, cause them to gather and bring them together?

Wang Jie, Commentary on the Mirror for Compounding the Medicine

The human being, moreover, is home to a host of major and minor inner gods. The most important among them dwell both in Heaven and within the individual, and therefore play a role in connecting the two realms. The gods who dwell in the three Cinnabar Fields (dantian) are, according to different texts, the Three Primes (sanyuan, which represent the original, precosmic breaths) or the Three Ones (sanyi, which represent the three basic levels of the cosmos). The twenty-four body spirits formed by the three sets of Eight Effulgences (bajing) are also related to the three Cinnabar Fields; they correspond to the twenty-four jieqi (energy nodes) of the year, and each set represents Heaven, Earth, and Humanity within the human being. In another formulation, the main inner gods rule over 18,000 other inner deities; when an adept meditates on these deities, Heaven "makes 18,000 more divinities descend to complete the inner body. This makes 36,000 gods altogether, who raise the whole body and let it ascend to Heaven" (Wushang biyao [Supreme Secret Essentials], 5.12b-14b). The inner landscape of divine beings and their palaces is depicted in the Neijing tu (Chart of the Inner Warp), a representation related to other pictures that portray the body as a mountain, which on its own is a microcosm.

Macrocosm and Microcosm in Ritual and Alchemy

Taoist ritual represents a complete time cycle, and its arrangement of altars reproduces the spatial structure of the cosmos. In a manner reminiscent of the body spirits mentioned above, an altar described in the Wushang biyao has each side measuring twenty-four feet, corresponding to the twenty-four periods of the year, and is provided with three tables assigned to the Three Sovereigns of Heaven, Earth, and Humanity (49.1a-2a). Spatial correspondences are also apparent in another altar, which is arranged in such a way as to correspond to the eight trigrams (bagua) at its four sides and the four corners, and the twelve earthly branches (dizhi) along its periphery. The altar, moreover, is a microcosm not only in relation to the cosmos in its temporal and spatial aspects, but also to the deities who inhabit it. Images of these deities are painted on scrolls and placed in positions to which their respective gods descend to take part in the ceremony.

The macrocosm-microcosm theory is also one of the main modes of expression in Waidan and Neidan (External Alchemy and Internal Alchemy). Based on the emblems of correlative cosmology, the elixir represents all the temporal and spatial features of the cosmos. As stated in the Zhouyi cantong qi (The Seal of the Unity of the Three in Accordance with the Book of Changes), for instance, the 384 scruples that compose one symbolic pound of elixir correspond to the number of lines in the sixty-four hexagrams of the Book of Changes (Yijing). Thus the elixir incorporates the cosmos and all its actual and potential changes. In both Waidan and Neidan, macrocosmic time sequences are reproduced in the system of fire phasing (huohou), while in Waidan the spatial arrangement of instruments on the alchemical altar is also established according to cosmological principles.