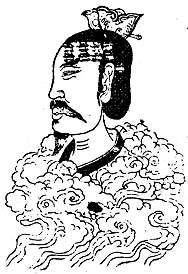 The Upper Cinnabar Field,
located in the region of the brain

The Cinnabar Fields, or dantian, are three loci in the human body that play a major role in breathing, meditation, and Neidan (Internal Alchemy) practices. Located in the regions of the abdomen, the heart, and the brain, but devoid of material counterparts, they establish a tripartite division of inner space that corresponds to other threefold motives in the Taoist pantheon and cosmology.

The lower Cinnabar Field is the dantian proper and is the seat of essence (jing). Different sources place it at 1.3, 2, 2.4, 3, or 3.6 inches (cun) below or behind the navel, and consider it to be the same as, or closely related to, other loci in the same region of the body: the Gate of the Existence (mingmen), the Origin of the Barrier (guanyuan), and the Ocean of Breath (qihai). In the first stage of the Neidan process ("refining essence into breath"), circulating the essence along these two channels generates the Internal Elixir. 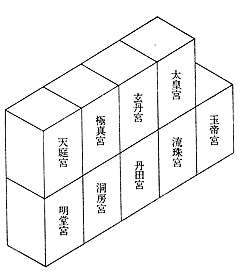 The middle Cinnabar Field is at the center of the chest according to some authors, or between the heart and the navel according to others. It is the seat of breath (or "energy", qi) and is also called Yellow Court (huangting), Crimson Palace (jianggong), or Mysterious Female (xuanpin, an emblem of the conjunction of Yin and Yang). Its central position in the body also inspired the names Central Palace (zhonggong) and "One Opening at the Center of the Person" (shenzhong yiqiao). In the second stage of the Neidan process ("refining breath into spirit"), the Internal Elixir is moved from the lower to the middle dantian and is nourished there.

The upper Field is located in the region of the brain and is the seat of spirit (shen). Also known as Muddy Pellet (niwan) or Palace of Qian (qiangong, with reference to the ☞ trigram representing Pure Yang), it is divided into nine palaces or chambers arranged in two rows. Niwan denotes both the upper dantian as a whole and the innermost palace or chamber (the third one in the lower row). Moving the Internal Elixir to the upper Field marks the third and last stage of the Neidan process ("refining spirit and reverting to Emptiness").

The Neidan tradition has inherited and developed several notions that have evolved in various contexts since Han times. The term dantian first occurs in two sources related to the transformation of Laozi into a divine being, both dating from 165 CE: the Inscription for Laozi (Laozi ming) mentions the term in connection to the Purple Chamber (zifang, the gallbladder), and the Stele to Wangzi Qiao (Wangzi Qiao bei) relates it to meditation practices. One of the two main sources on early Taoist meditation, the third-century Scripture of the Yellow Court (Huangting jing), frequently refers to the three dantian as the Three Fields (santian) and the Three Chambers (sanfang), and also mentions the Yellow Court and the Muddy Pellet. The other main early Taoist meditation text, the Central Scripture of Laozi (Laozi zhongjing), gives the first detailed description of the lower Field, saying that it contains the whole cosmos and is the residence of the material carriers of essence (jing), i.e., semen for men and menstrual blood for women. The same passage shows that the appellation "cinnabar" originally derives from the red color of the innermost part of the dantian, with no direct relation to the mineral cinnabar or to the elixir. [See a translation of this passage.]

In several early descriptions, the three dantian also appear as residences of inner gods visualized by adepts in meditation practices — in particular, the One (Taiyi), who moves through the three Fields within the human body. The best-known occurrence of the term dantian in this context is found in the Baopu zi. [See a translation of this passage.] The Shangqing sources developed these meditation practices. The practice of embryonic breathing (taixi), also known as "breathing of the Cinnabar Field" (dantian huxi), further contributed to shape the Neidan view of the dantian.